Altar Ego was on display at the annual Day of the Dead show in San Francisco. The installation is an interactive computer-driven altar in which the viewer himself becomes the person being memorialized. The theme of the show “Calling on the spirits to face the future” points to the past as well as the future, and it inspired me to make something that is both traditional and high-tech which draws from the past and shows the future. To this end, my installation is a hybrid of a traditional altar (multiple levels with an arch on top, skeletons, salt, tissue paper, candles, flowers, etc.), and projected images and text gleaned from the internet. The images and text are projected on the walls and on white objects placed throughout the altar — primarily in empty picture frames, but also onto “blank” objects such as a white-painted books, CD, DVD, political button, newspaper, stone, etc. There is also a kiddie record player that plays the song that was #1 on your birthday, complete with a spinning label (title/artist) at 45 r.p.m. I also have a crystal ball that shows a heavily distorted image of you when you get closed to it. For this, there is a webcam hidden in the eye of a skull.

The personalization of the altar is made possible by software which prompts the user to log into their Facebook account. Once logged in, the software uses the Facebook Developer API’s to load images and other personal data (birthday, favorite quotes, books, movies, music, religion, political views, family members, friends, etc.).  It then gets additional data from several other sources (google, flickr, birthdayjams.com, a mayan horoscope site, a quote generator site, and a flag hosting site). It then generates a web page that, when projected, will place images into frames and onto the blank objects. The projections display for a couple of minutes before going back to the welcome “screen” which projects a demo mode.

To make this possible, I project the image off a 25 mirror array, each mirror pointed at a different angle. Each image is scaled, rotated,  and skewed as needed so that after bouncing off the mirrors and hidden obliquely angled objects, the proportions of the original image are preserved.

Here is a video of it working 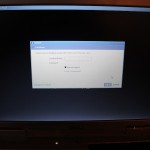 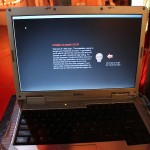 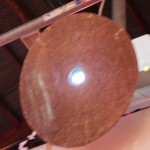 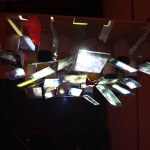 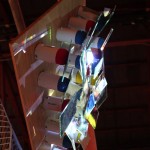 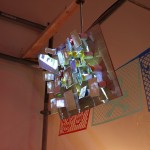 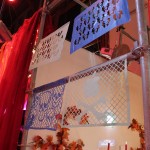 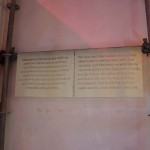 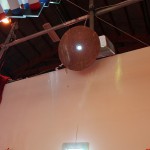 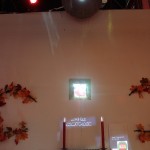 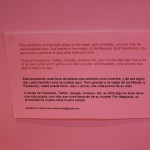 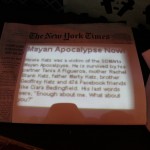 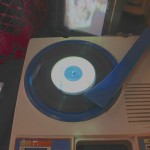 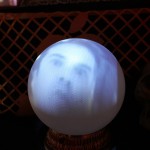 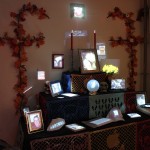 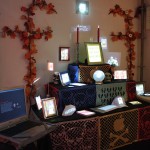 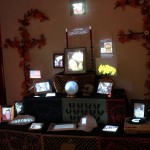 In cases where the user had little available images or information, I used default images taken from Facebook, or ones that I “canned”, such as a peace sign on the political button or a smiley face for the religion.

The computer sends its audio to the record player’s speaker which plays the song.

Papel Picado (perforated paper) symbolizing the wind is very traditional. Typically it shows cutesy images of skulls and skeletons. I cut my own papel picado (admittedly, I used or modified some existing skull designs) a laser cutter. I integrated the logos of Google, Twitter, Facebook, and Apple into the designs. I also made two papel picado that show the first paragraph of the Facebook terms of service in both English and Spanish.

An arch is also traditional, symbolizing a bridge to the afterlife. In this case, I use the Facebook f logo (and its mirror image) to form the arch. I use garlands of autumn leaves (artificial) for this purpose.

I also laser cut and etched a Mayan calendar into a piece of plywood. I cut a whole in the center and have the projection beam coming out of it.